The use of quality devices is very important for properly establishing a diagnosis. Our eye clinic offers only the best diagnostics and technology that makes us stand out among others in the region. 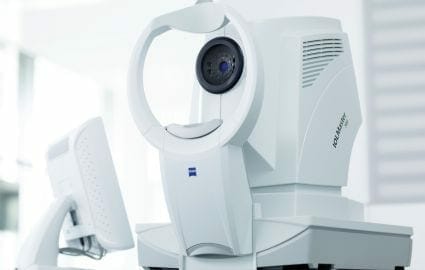 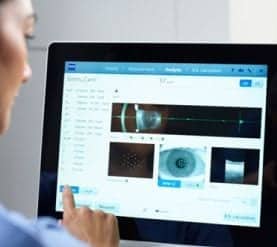 The IOL Master Zeiss device is used for calculating intraocular lens (IOL) power for each of the patient’s eyes individually. The device uses laser technology for determining the IOL dioptre of the implant that is to be implanted into the eye after cataract surgery.

The IOL Master provides quick and precise measurement of eye length, corneal curvature and anterior chamber depth. It is equipped with the most extensive software set of formulas and constants (factory default lens parameters) for calculating the IOL dioptre, which is extremely important for cataract surgery, especially if the patient previously underwent laser vision correction surgery or if the patient is highly nearsighted.
The device calculates the power of the intraocular lens in dioptres, regardless of whether the eye is phakic – with the natural lens, aphakic – without the lens, or for a planned implantation of refractive phakic lenses for the correction of a refractive error. The IOL Master Zeiss also calculates lens power depending on the planned implantation site, which is very important for implantations of Verisyse, Veriflex and phakic (ICL) refractive lenses.
The IOL Master uses a non-contact method; it is non-invasive and painless for the patient without the need for anaesthesia, and without the possibility of post-examination infections.

The Ocular Response Analyzer (ORA) is the only instrument in the world capable of measuring the biomechanical properties of the cornea (the transparent part of the eye), quantifying the different corneal conditions and taking them into account during accurate intraocular pressure measurement (IOP).

By using only one device, the medical specialist receives valuable information about corneal hysteresis and resistance and central corneal thickness, which are very important parameters affecting the quality of refractive surgery (laser and other surgical vision corrections). This information is of crucial importance for glaucoma patients (increased intraocular pressure) and significantly affects the choice of conservative treatment for patients suffering from glaucoma, as well as the decision to potentially perform a surgical procedure.

These measurements are used in several important fields of ophthalmology:

– help in a more accurate assessment of the eligibility of candidates for laser vision correction;

– provide accurate measurements of intraocular pressure, as well as oscillations in circadian rhythm;

– provide a better estimation of the progression of glaucoma disease, i.e. damage to the optic nerve

The test is completely non-invasive and painless for the patient, and only takes a few seconds, after which the measurements are processed by computer software, providing the medical specialist with valuable information for a more complete and better service. 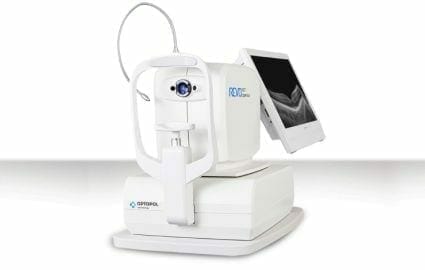 Optical coherence tomography (OCT) is one of the latest methods of visualizing the posterior segment of the eye. It is irreplaceable in diagnostics due to its layered display of the retina, especially its central part – the macula or yellow spot; and the optic nerve.

The device provides a display of the corneal surfaces like a geographic map and provides information on the density, shape and thickness of the cornea, as well as other information about the anterior segment of the eye. 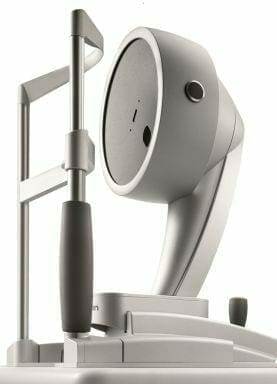 Our cornea, the front transparent part of the eye, although perfectly smooth, is not a perfectly spherical body. Its thickness at different points, its curvature and the relationship between the anterior and posterior surfaces are unique to every individual, while also being extremely important pieces of data in the surgical removal of refractive errors.

The corneal topographer is a device that takes into account and precisely measures all these and numerous other parameters. The latest generation of such devices is called the Pentacam device, which works on the principle of the so-called 3D Scheimpflug camera analysing 25,000 reference metering points on the cornea.

The device provides a display of the corneal surfaces like a geographic map and provides information on the density, shape and thickness of the cornea, as well as other information about the anterior segment of the eye. The rotation of the camera and recording in all meridians allows a three-dimensional view of the structures of the anterior segment of the eye. In addition to the aforementioned, it performs a 3D analysis of the anterior chamber of the eyeball in the sagittal section, pachymetry (measuring the thickness of the cornea in every corneal point), and tomographic analysis of the cornea; together with our Allegretto EyeQ laser, it constitutes a unified segment of topography-guided programs for laser vision correction.

In such a program of laser surgery, the individual ocular surface irregularities of each eye detected by the Pentacam device are sent to the laser software, which adjusts the laser vision correction individually to each eye, thus providing the best result.
The Pentacam software also supports the calculation of intraocular lenses in patients after LASIK in cases where conventional methods give a more uncertain calculation.
The examination of each eye takes less than two seconds. The software corrects for the involuntary movements of the eye using the “eye tracking” system and is completely non-invasive. 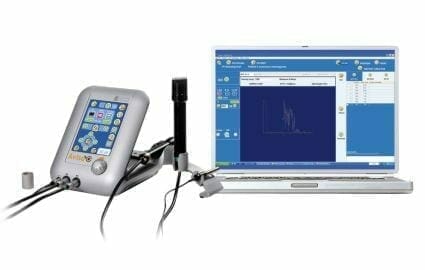 An eye ultrasound is a simple and non-invasive method of examining the eye that enables us to see changes in the eye that we could not otherwise visualize in a classic ophthalmic examination.

The ultrasound examination of the eye provides information on the interior of the eye and the skeletal frame of the eye – the orbit. This is most commonly used in cases of blurring of the transparent optical media of the eye.

A B-scan ultrasound can provide information on the morphological appearance of the fundus, for example, if there is retinal detachment, bleeding inside the eye, or if tumours are present. Ultrasound is also used in calculating the strength of the lens when preparing patients for surgery (so-called biometry).

An A-scan ultrasound is used to determine the length of the eye and, based on other input parameters, the software calculates the prescription value of the lens that will be implanted into the eye after cataract removal. During the examination, the ultrasonic probe is pressed onto closed eyes. The pressure is very mild, and the patient is occasionally asked to direct their view (while the eyes are still closed) in the required direction for better visualization of the examined ocular structures.
The examination is completely painless and requires no preparation. 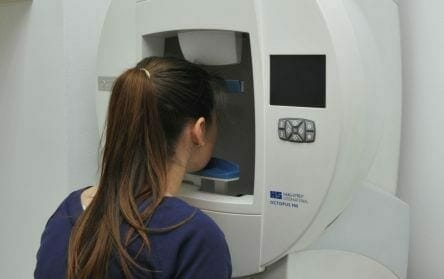 Visual field recorder with static and kinetic perimetry. Enables testing at all levels of the disease, whether for purposes of an early diagnosis, monitoring progression or for performing the most sensitive examinations in the terminal stages of the disease. 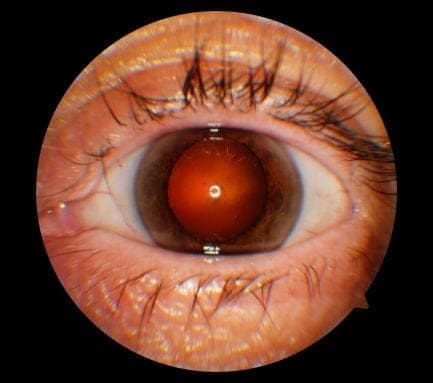 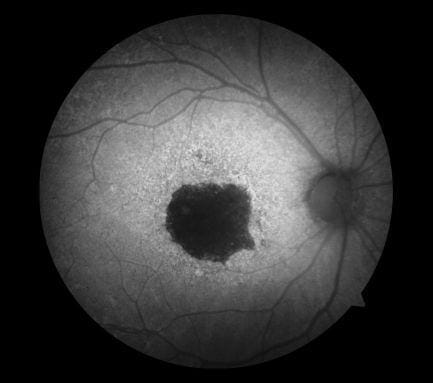 The new VISUCAM fundus camera with a 24-megapixel sensor provides detailed images of the interior surface of the eye that help diagnose and monitor a wide range of eye diseases.

Fluorescein angiography (FAG) is used for examining the blood vessels of the retina, choroid and iris, as well as the function of the pigment epithelium, which makes it an indispensable method in the diagnosis of diseases of the retina (the posterior segment of the eye).

(The retinal structure is delicate, interwoven with blood vessels and subtle barriers between the layers so the diagnosis of retinal disease cannot always be determined by an ophthalmoscopy of the fundus.)

A light meal is recommended before the procedure. Before the FAG, eye drops for pupil dilation are applied and their effect lasts 2-3 hours after the procedure, so the patient should be accompanied by another person. The FAG test begins by injecting the orange contrasting agent sodium fluorescein into the ulnar vein.

(Sodium fluorescein reaches the blood vessels of the fundus in about 10 seconds, becomes light blue and begins to fluoresce in the yellow-green spectrum. After that, we take images of the fundus and assess the permeability and patency of the blood vessels, the accumulation of colour in some areas, etc. Better visualization significantly facilitates the analysis, and the series of images taken depending on the time elapsed from initiating the contrast make it possible to track the dynamics of all changes. 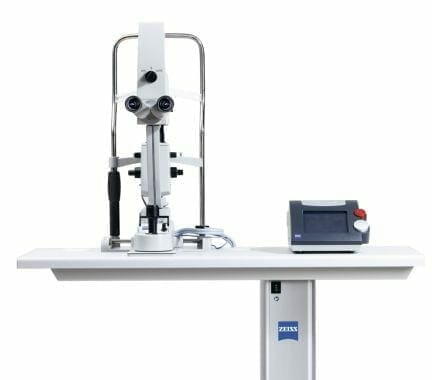 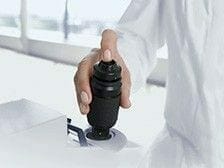 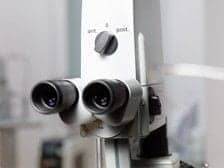 VISULAS ® The VISULAS ® YAG III Combi from Carl Zeiss is a multi-purpose laser for retinal photocoagulation in diabetic patients, for secondary cataract treatment and for laser glaucoma therapies.

The VISULAS YAG III Combi is one of the laser devices used at the Medić Jukić Eye Clinic and it can provide three services. Because of its photocoagulation and disruptor laser properties, it is used for a broad spectrum of ocular pathology procedures.

In a way that is both safe and compact, it provides the necessary laser therapy for diseases of the retina, cataracts and glaucoma. Among other things, it has a photocoagulatory effect. The laser acts with its thermal effect and causes photocoagulation of the tissue to which it is applied. The target tissue of the retina absorbs the emission of light energy, damaging the tissue and causing a burn that results in a scar after two weeks. The scarring is targeted in order to make use of its tightness and immobility. The scar is specifically created on the site of the retinal damage or “wild” blood vessel. In this way, the laser “seals” the reinforcing retina or the place of the damage, preventing the progression of the disease.

VISULAS YAG III Combi is used in the treatment of various diseases of the eye, most commonly in the retina, diabetic retinopathy, conditions following retinal vascular occlusion, retinal ruptures and peripheral retinal degenerations, degenerative diseases of the macula that do not affect the fovea, some inflammatory diseases of the retina and choroid, glaucoma and some other less common eye diseases.

Timely laser treatment can prevent the occurrence of retinal detachment, a serious condition that requires expensive and complicated surgery with an uncertain outcome. Laser photocoagulation is usually done as an outpatient procedure, with pupil dilation. The procedure lasts 10 minutes. It is mostly painless (an occasional mild burning sensation may be felt) or it can be performed with anaesthetic eye drops. The laser beam is applied through a contact lens (panfundoscope). The laser beam is green, and the patient sees it as flashing before the eye. After the procedure, the patient may go home. The eye will be seeing afterimages for a couple of minutes after the procedure, similar to the effect of a camera flash.

Laser photocoagulation can be performed once or several times, depending on the eye pathology.

The VISULAS YAG III laser can also be very successful in treating numerous benign growths on the skin of the face and eyelids, such as warts, and permanently removing misplaced or unwanted lashes and hairs. 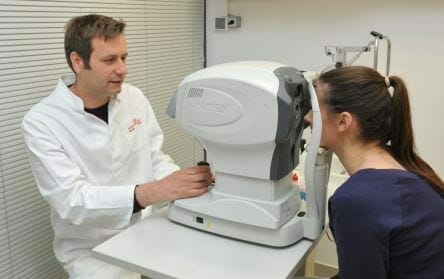 A combination of an auto-refractometer and auto-keratometer with or without a contact tonometer.
A diagnostic device for measuring and determining the diopter and contactless intraocular pressure measurement.